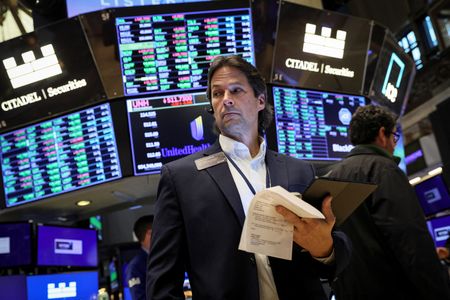 By Sinéad Carew and Huw Jones

NEW YORK/LONDON (Reuters) – The S&P 500 closed up more than 1% while U.S. Treasury yields fell and the dollar was little changed on Wednesday as investors bet that upcoming U.S. inflation data would allow the Federal Reserve to slow the pace of interest rate hikes.

Longer-dated treasury yields fell a day before release of December’s U.S. consumer price index (CPI) data as investors bet inflation is on a sustainable downward path that could lead the Fed to slow rate hikes or cut rates.

While the dollar index was virtually unchanged, the euro briefly hit a seven-month high against the greenback but held within a narrow range as traders avoided big moves ahead of the inflation data.

Crude oil prices shrugged off early losses to rally 3% as hopes for an improved global economic outlook and concern over the impact of sanctions on Russian crude output outweighed a massive surprise build in U.S. crude stocks.

“This week is bundled up in some good inflation expectations data for Thursday,” said Nela Richardson, chief economist at ADP.

“The Goldilocks report we got for December with strong employment growth and moderating wage growth was the best case scenario for the market. They’re waiting for confirmation on Thursday that CPI is moderating. If they get that the rally will continue this week and on into next week.”

December’s CPI is expected to show annual inflation at 6.5%, down from 7.1% in November. The data will be crucial for investors placing bets on the Fed’s next steps.

But with a tight labor market that is “not participating in the Fed’s plan,” Richardson says investors seem to “over-prioritze data that suggests the Fed will pivot.”

“The market seems to think that a moderation in inflation necessarily leads to a Fed pivot but I don’t. I think the Fed keeps hiking rates and that they stay at higher levels for some time,” she said.

Current expectations are for a 25 basis points rate increase at the February meeting after a 50 basis point hike in December.

“The first step would be a downshift in the pace of hiking and the next would be a pause,” said Cliff Hodge, chief investment officer at Cornerstone Wealth.

The pan-European STOXX 600 index earlier closed up 0.38% while MSCI’s gauge of stocks across the globe gained 1.04%. Emerging market stocks rose 0.28%.

But he noted that the Fed keeps saying it may have to keep rates higher longer than the market expects.

Earlier, copper rose above $9,000 a tonne for the first time since June on hopes for demand improvements in China, which has removed COVID-19 restrictions.