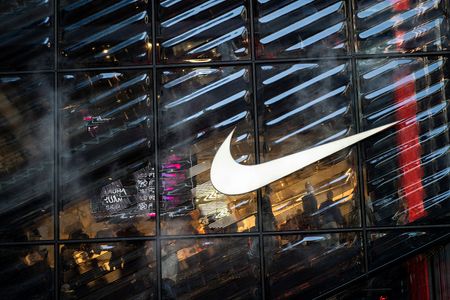 (Reuters) -Nike Inc reported its best quarterly revenue growth in more than a decade barring one quarter and handily beat profit expectations on Tuesday, as North American shoppers rushed to stock up on sneakers and sportswear before the holidays.

Nike’s finance chief Matthew Friend said on a post-earnings call the company had made good progress in clearing inventory during the quarter, and that products for the spring season were arriving earlier with faster transit times.

He added that the company saw record demand during the Black Friday and Cyber Monday period in North America, while in Europe, Middle East, and Africa regions, Nike saw its biggest Cyber Week with demand having increased by 75% from last year.

“It does look like Nike’s situation (and the whole industry, probably) is improving because the shipping problems have mostly been fixed,” Morningstar analyst David Swartz said.

“Nike’s ability to gets its product on time will help it to manage inventories, margins, and pricing better in the next few quarters,” he said.

Nike posted a profit of 85 cents per share in the second quarter ended November, topping an average estimate of 64 cents, according to Refinitiv data.

Revenue jumped 17% to $13.32 billion, beating an average estimate of $12.57 billion. That was its best showing in 42 quarters, barring a 95% surge in the fourth quarter of 2021 when retail stores had just started to open up after a year of pandemic lockdowns.

Sales in North America, Nike’s largest market, surged 30%, while those in its most profitable market, China, fell 3% due to COVID-related restrictions in the country.

Swartz said the China business was showing signs of improvement since the Chinese government had relaxed curbs.

Nike’s margins in the quarter were pressured, though, due to a stronger dollar, higher freight and logistics costs, as well as higher markdowns to clear inventory. Gross margins decreased 300 basis points to 42.9%.

The company said it expected revenue growth for the current year ending May 2023 to improve slightly to low teens on a currency-neutral basis from its previous forecast of a low double-digit increase. It did not provide details.