U.S. poised to become net exporter of crude oil in 2023 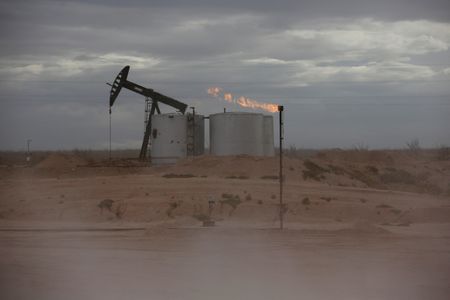 HOUSTON (Reuters) – The United States has become a global crude oil exporting power over the last few years, but exports have not exceeded its imports since World War II. That could change next year.

Sales of U.S. crude to other nations are now a record 3.4 million barrels per day (bpd), with exports of about 3 million bpd of refined products like gasoline and diesel fuel. The United States is also the leading liquefied natural gas (LNG) exporter, where growth is expected to soar in coming years.

But the United States consumes 20 million barrels of crude a day, the most in the world, and its output has never exceeded 13 million bpd. Until recently, the idea that it would be anything but a big crude importer was folly.

Factors changing that equation this year include sanctions hurting Russia’s exports of oil and natural gas following its invasion of Ukraine, and Washington’s massive release of oil from emergency reserves to combat spiking gasoline prices.

To become a net exporter of crude, the United States needs either to boost production or curtail consumption. U.S. petroleum demand is expected to rise 0.7% to 20.51 million bpd next year, so that means production would have to rise.

The United States already produces more oil than any other country in the world including Saudi Arabia and Russia. U.S. shale fields are aging and production growth this year has been sluggish. Overall output should reach a record 12.34 million bpd next year – but only if prices are lucrative enough to encourage oil drillers to pump more.

European refiners have snapped up U.S. grades to offset the loss of Russian oil, and with U.S. crude’s deeper discounts to global benchmarks, Asian refiners have stepped up purchases to 1.75 million barrels per day, data analytics firm Kpler said.

Export terminal operators are rushing to boost their capacity to better service the giant tankers that can carry more than 2 million barrels of oil.

“Russia has proven to be an unreliable supplier,” said Sean Strawbridge, chief executive of the largest U.S. oil export facility, Port of Corpus Christi. “That really creates a wonderful opportunity for American producers and American energy.”

Corpus Christi could see a 100,000 bpd increase in exports next year, Strawbridge said, on top of the record shipments of 2.2 million bpd in October.

Analysts said net exports could taper off if numerous countries worldwide fall into a recession, hampering demand, and if further relaxation of sanctions on Venezuelan crude oil boosts that country’s shipments.

The United States became the world’s largest exporter of liquefied natural gas during the first half of 2022, surpassing Qatar and Australia, on the back of demand from Europe and surging prices.

LNG exports likely will continue to rise into 2023 as Europe scrambles to refill storage depleted this winter, said Matt Smith, analyst at Kpler.

Refining products exports have dropped due to plant closings and lower consumer demand. The U.S. exported an average of 3.1 million bpd of fuels through September this year, EIA data showed, down from the 3.2 million bpd in the same period in 2019.

One exception to that was diesel, where exports rose to a three-year high in July of 1.3 million bpd, Kpler data showed. Europe’s upcoming ban on Russian fuel has driven diesel shipments to Europe to average 330,000 bpd in the first 15 days of December, more than five times its monthly average so far this year.

(This story has been corrected to fix paragraph 12 to say Corpus Christi’s record crude exports were in October, not the third quarter)