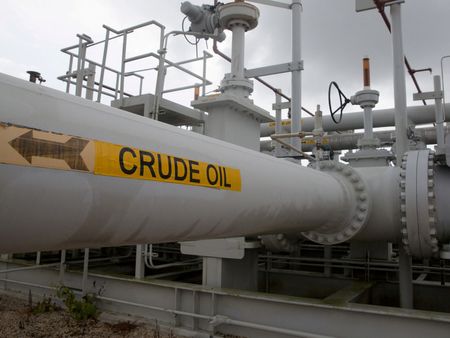 (Reuters) – U.S. crude oil stockpiles rose by more than 10 million barrels last week, the most since March 2021, buoyed by releases from the Strategic Petroleum Reserve and as refiners reduced activity.

Crude inventories increased by 10.2 million barrels in the week ended Dec. 9 to 424.1 million barrels, compared with analysts’ expectations in a Reuters poll for a 3.6 million-barrel drop.

The crude stockpile figure included a 2.26 million per day (bpd) adjustment. Kpler analyst Matt Smith attributed the adjustment to exports which were considerably lower on the U.S. Gulf last week than the EIA reported.

The sharp crude build come as a recession threatens economies in the United States and Europe, worrying markets about demand for crude oil and petroleum products.

SPR crude inventories fell by 4.7 million barrels in the week to 382.3 million, their lowest since January 1984, while stocks at the Cushing, Oklahoma, delivery hub for U.s futures rose by 426,000 barrels, the EIA said.

Last week’s shutdown of the Keystone pipeline, which ferries about 620,000 bpd of crude from Canada to the United States, is expected to hit inventories at Cushing and Gulf Coast.

“(Refiners) were just making too much product and had to pull back on the refiner utilization rate and that’s going to tempt builds,” said Bob Yawger, director of energy futures at Mizuho.

U.S. gasoline stocks rose by 4.5 million barrels in the week to 223.6 million barrels, the EIA said, compared with expectations for a 2.7 million-barrel rise.​

Similarly, distillate stockpiles, which include diesel and heating oil, rose by 1.4 million barrels in the week to 120.2 million barrels, the EIA data showed, versus expectations for a 2.5 million-barrel rise.

(Reporting By Arathy Somasekhar in Houston; Editing by Marguerita Choy)