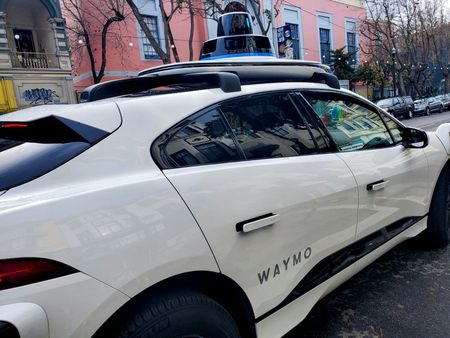 SAN FRANCISCO (Reuters) -Alphabet Inc’s Waymo has applied for the final permit it needs in California before it can sell fully autonomous rides, the company told Reuters on Tuesday.

A decision on its application, which was submitted Monday to the California Public Utilities Commission, could take months. General Motors Co’s Cruise is the only company with the permit so far and has charged for driverless rides in San Francisco since June.

The two rivals are frontrunners in the slow-moving effort to demonstrate that autonomous transport can become a widely available and profitable service, with San Francisco’s hills, weather and clogged roads making it a key proving ground. GM plans to expand to more cities next year.

Andrew Chatham, a software engineer at Waymo, said the company had updated software that controls braking and accelerating to cut jitters and overall had exceeded on goals this year related to driving behavior.

The more “assertive” autonomous driving system partly explained smoother acceleration and braking noted by a Reuters reporter compared to a similar ride a year ago, Chatham said during a test drive last Friday.

Waymo can be patient, though. When a double-parked driver was slow to make passing room on a one-lane, one-way road on Friday, Waymo did not honk. Its vehicles typically sound the horn only when a backing-up car is getting too close, said Chatham, a 13-year veteran of the company.

Waymo, which describes its driverless service as “rider-only,” has carried fare-paying passengers in San Francisco since May in self-driving cars but with a human back-up driver present.