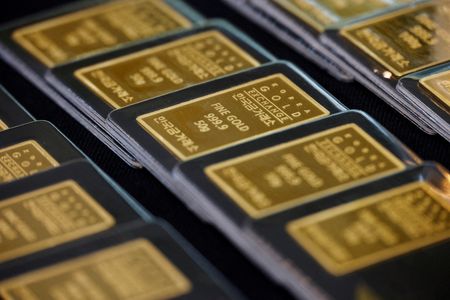 (Reuters) – Goldman Sachs expects gold, with its real demand drivers, to outperform the highly volatile bitcoin in the long term, the bank wrote in a Monday research note.

Gold is less likely to be influenced by tighter financial conditions, meaning it is “a useful portfolio diversifier,” said Goldman, especially given that gold has developed non-speculative use cases while bitcoin is still looking for one.

Goldman’s analysis showed that while traders use gold to hedge against inflation and dollar debasement, bitcoin resembles a “risk-on high-growth tech company stock.”

The value proposition of bitcoin, which the bank called “a solution looking for a problem,” comes from the scope of its future real use cases, making it a more volatile and speculative asset than the precious metal.

“Bitcoin’s volatility to the downside was also enhanced by systemic concerns as several large players filed for bankruptcy,” it noted, citing the collapse of the FTX exchange and the 3AC hedge fund.

While net speculative positions in both the assets fell sharply over the last year, gold is marginally up year-on-year against bitcoin’s plunge by 75%, the bank noted.

“Tighter liquidity should be a smaller drag on gold, which is more exposed to real demand drivers” like Asian consumer buying, central bank monetary demand, safe-haven investments, and industrial applications, it said.

“Moreover, gold may benefit from structurally higher macro volatility and a need to diversify equity exposure.”

(Reporting by Deep Vakil in Bengaluru; Editing by Josie Kao)