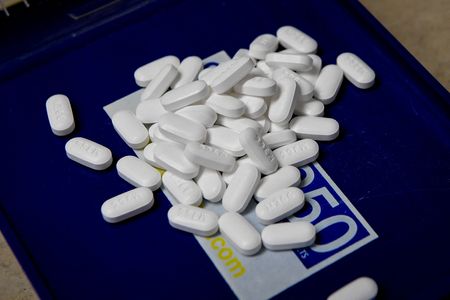 (Reuters) – The sprawling, five-year-long litigation over the U.S. opioid crisis appears to be entering its final phase with finalized agreements by Teva Pharmaceutical Industries Ltd and AbbVie Inc.

There are tentative agreements by CVS Health Corp, Walgreens Boots Alliance Inc and Walmart Inc to settle with state, local and tribal governments.

Smaller pharmacy operators, including Rite Aid Corp and Kroger Co, have yet to settle. But the deal by the nation’s largest retail pharmacies adds to previous settlements with drugmakers and the largest U.S. distributors. The following are major companies that were accused of contributing to the crisis, and settlements or judgments involving those companies. All have denied the allegations.

-Agreed in principle to pay a combined $13.8 billion to resolve claims against them nationwide.

-Ordered in August to pay a combined $650.6 million to two Ohio counties after a jury found them liable for fueling opioid addiction there.

-Reached separate settlements with Florida, with CVS agreeing in March to pay $484 million, Walgreens agreeing in May to pay $683 million and Walmart agreeing last month to pay $215 million. Some of Walgreens’ settlement with Florida has also been included in the nationwide deal announced this week.

-CVS and Walmart, but not Walgreens, settled with West Virginia for $82.5 million and $65 million, respectively.

-All three pharmacy chains along with Rite Aid agreed in July 2021 to pay a combined $26 million to settle claims by the New York counties of Suffolk and Nassau.

-Agreed in July 2021 to a proposed $21 billion nationwide settlement, which was finalized in February.

-Reached separate deals with plaintiffs that declined to join the nationwide settlement, including $518 million for Washington state in May, $250 million for Oklahoma in June and $400 million for West Virginia cities and counties in August.

-Settled in February with hundreds of Native American tribes for $440 million, on top of a $75 million deal with the Cherokee Nation in September 2021.

-Prevailed in June after a non-jury trial against claims by a West Virginia city and county that had sought $2.5 billion.

-McKesson agreed to pay $141 million to Alabama in April.

-Agreed in May to a nationwide $6 billion settlement as part of its bankruptcy plan, funded by its Sackler family owners, who will be shielded from future liability. The deal cannot be finalized unless a federal appeals court revives the Sacklers’ legal shield, which was ruled illegal by a federal judge.

-In November 2020, entered a guilty plea to three criminal counts for violating a federal anti-kickback law, defrauding the United States and violating the Food, Drug and Cosmetic Act.

-Agreed in July 2021 to a proposed $5 billion nationwide settlement, which was finalized in February.

-Reached separate settlements with holdout states, including $40.5 million for New Hampshire in September, $70.3 million for Alabama in April and $99 million for West Virginia in April.

-The Oklahoma Supreme Court in November 2021 overturned a $465 million judgment the state won following a 2019 trial.

-In November, finalized claims nationwide for $4.25 billion, some of which is to be paid as a supply of the overdose-reversing drug naloxone. The deal includes previously announced settlements with West Virginia, Texas, Florida, Rhode Island, Louisiana and San Francisco.

-Has agreed to pay an additional $100 million to settle claims by Native American tribes.

-Found liable by a New York jury for fueling opioid addiction in that state, with the dollar amount to be determined at a later trial.

-In November, finalized a $2.37 billion nationwide settlement resolving claims against Allergan, a company it acquired in 2020. The deal includes previous agreements with states including New York.

-Reached a $450 million settlement with more than 30 states as part of a bankruptcy filing in August.

-Reached a $1.7 billion nationwide settlement as part of its bankruptcy reorganization plan, approved in February.