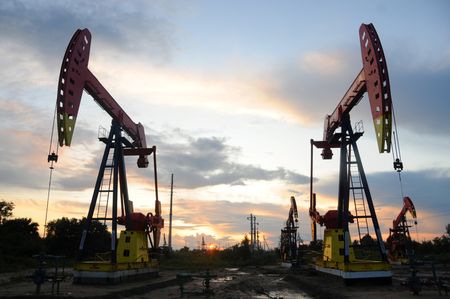 NEW YORK (Reuters) -Oil dropped by about 2% on Friday, logging a second weekly decline, due to concern about weakened demand in China and further increases to U.S. interest rates.

Both benchmarks posted weekly losses, with Brent down about 9% and WTI roughly 10%.

The market structure of both oil benchmarks shifted in ways that reflect dwindling supply concerns.

Crude came close to record highs earlier this year as Russia’s invasion of Ukraine added to those worries. In addition, the front-month futures contract soared to a gigantic premium over later-dated contracts, a signal that people were worried about the immediate availability of oil and were willing to pay handsomely to secure supply.

Those supply concerns are waning. The current WTI contract is now trading at a discount to the second month, a structure known as contango, for the first time since 2021, Refinitiv Eikon data showed.

This condition will also benefit those looking to put more oil in inventories for later, especially with stocks still at low levels.

“The deeper the contango, the more likely the market will put those barrels in storage,” said Bob Yawger, director of energy futures at Mizuho in New York.

Brent was still in the opposite structure, backwardation, though the premium of nearby Brent over barrels loading in six months fell as low as $3 a barrel, the lowest since April.

China, which sources say is looking to slow crude imports from some sources, has seen a rise in COVID-19 cases while hopes for less aggressive U.S. rate hikes have been dented by remarks from some Federal Reserve officials.

“The situation in China with COVID continues to haunt this market,” said John Kilduff, partner at Again Capital LLC in New York. “So much optimism gets priced in to the market as soon as they try to say that they’re going to reopen, but then the reality on the ground is just completely opposite of that hopeful analysis.”

As the European Union’s ban on Russian crude looms on Dec. 5, the prospect of more barrels from Russia pressuring the spot crude oil market also weighed on futures prices.

Recession concerns have dominated this week even with a tightening of supply by the Organization of the Petroleum Exporting Countries (OPEC) and its allies, together known as OPEC+.

“On the demand side, there are concerns about an economic slowdown,” said Avatrade’s Naeem Aslam. “The path of least resistance seems skewed to the downside.”

The Fed is expected to raise rates by a smaller 50 basis points (bps) at its Dec. 13-14 policy meeting after four consecutive hikes of 75 bps, a Reuters poll showed.

OPEC+, which began a new round of supply cuts in November, holds a policy meeting on Dec. 4.

(Reporting by Laila Kearney in New YorkAdditional reporting by Alex Lawler in London, Sonali Paul in Melbourne and Muyu Xu in SingaporeEditing by Philippa Fletcher, Matthew Lewis and David Gregorio)