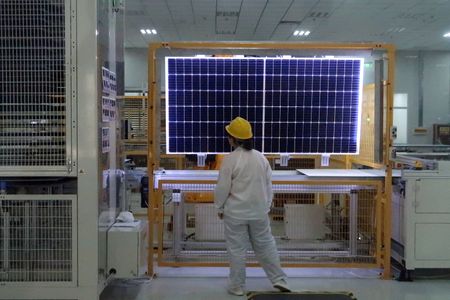 (Reuters) -More than 1,000 shipments of solar energy components worth hundreds of millions of dollars have piled up at U.S. ports since June under a new law banning imports from China’s Xinjiang region over concerns about slave labor, according to federal customs officials and industry sources.

The level of seizures, which has not previously been reported, reflects how a policy intended to heap pressure on Beijing over its Uyghur detention camps in Xinjiang risks slowing the Biden administration’s efforts to decarbonize the U.S. power sector to fight climate change.

U.S. Customs and Border Protection has seized 1,053 shipments of solar energy equipment between June 21, when the Uyghur Forced Labor Protection Act went into effect, and Oct. 25, it told Reuters in response to a public records request, adding none of the shipments have yet been released.

The agency would not reveal the manufacturers or confirm details about the quantity of solar equipment in the shipments, citing federal law that protects confidential trade secrets.

Three industry sources with knowledge of the matter, however, told Reuters the detained products include panels and polysilicon cells likely amounting to up to 1 gigawatt of capacity and primarily made by three Chinese manufacturers – Longi Green Energy Technology Co Ltd, Trina Solar Co Ltd and JinkoSolar Holding Co.

Combined, Longi, Trina and Jinko typically account for up to a third of U.S. panel supplies. But the companies have halted new shipments to the United States over concerns additional cargoes will also be detained, the industry sources said.

The sources asked not to be named because they were not authorized to speak publicly on the matter.

China denies abuses in Xinjiang. Beijing initially denied the existence of any detention camps, but then later admitted it had set up “vocational training centers” necessary to curb what it said was terrorism, separatism and religious radicalism in Xinjiang.

Chinese foreign ministry spokesperson Zhao Lijian told a regular news briefing on Friday that claims about the use of forced labor in Xinjiang were “the lie of the century fabricated by a small group of anti-China individuals” and would hinder the global response to climate change.

“The U.S. side should immediately stop the unreasonable suppression of China’s photovoltaic enterprises and release the seized solar panel components as fast as possible,” he said.

In an email, Jinko said it is working with CBP on documentation proving its supplies are not linked to forced labor and is “confident the shipments will be admitted.”

Longi and Trina did not respond to requests for comment.

The bottleneck is a challenge to U.S. solar development at a time the Biden administration is seeking to decarbonize the U.S. economy and implement the Inflation Reduction Act (IRA), a new law that encourages clean energy technologies to combat climate change.

Solar installations in the United States slowed by 23% in the third quarter, and nearly 23 gigawatts of solar projects are delayed, largely due to an inability to obtain panels, according to the American Clean Power Association trade group.

ACP urged the Biden administration to streamline the vetting process for imports.

“After more than four months of solar panels being reviewed under UFLPA, none have been rejected and instead they remain stuck in limbo with no end in sight,” it said in a statement.

The UFLPA essentially presumes that all goods from Xinjiang are made with forced labor and requires producers to show sourcing documentation of imported equipment back to the raw material to prove otherwise before imports can be cleared.

CBP would not comment on the length of the detainments or say when they might be released or rejected. “Ultimately, it is contingent upon how quickly an importer is able to submit sufficient documentation,” CBP spokesperson Rhonda Lawson said.

Longi, Trina and Jinko source most of their polysilicon from U.S. and European suppliers such as Hemlock Semiconductor, a Michigan-based joint venture between Corning Inc and Shin-Etsu Handotai Co Ltd, and Germany’s Wacker Chemie, the industry sources said.

A Wacker spokesperson would not comment on the U.S. detainments but said the company sources quartzite from suppliers in Norway, Spain and France.

“Our procurement strategy gives us every reason to be confident that the products used in our supply chain are made in a manner that respects human rights,” spokesperson Christof Bachmair said.

Hemlock said in a statement that it sources all metallurgical-grade silicon from suppliers using quartz mined in North and South America.

CBP has previously said that it had detained about 1,700 shipments worth $516.3 million under UFLPA through September but has never before detailed how many of those shipments contained solar equipment.

The EU has also proposed a ban on products from Xinjiang but has not implemented one.