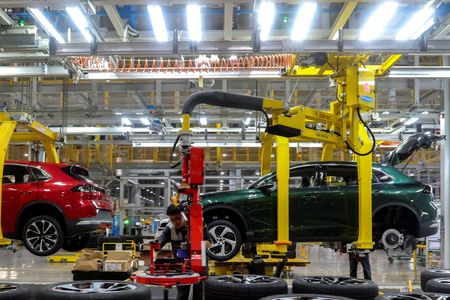 South Korea, Japan, Brazil and the European Union have criticized the overhaul of the $7,500 EV tax credit signed into law in August by President Joe Biden as part of the Inflation Reduction Act that immediately disqualified most EVs for credits.

The U.S. Treasury last month sought input from automakers and others as it implements the new law.

South Korea said it should be treated the same as North American countries or “a grace period of three years should be provided for the implementation of clean vehicle tax credits.”

Hyundai, which is building a $5.54 billion electric vehicle and battery plant in Georgia, asked Treasury to allow its foreign-made EVs to be eligible until it begins U.S. EV production.

The EU said in comments the law “risks causing not only economic damage to both the U.S. and its closest trading partners … but could also trigger a harmful global subsidy race to the bottom on key technologies and inputs for the green transition.”

Vietnamese carmaker VinFast, which plans to begin building EVs in North Carolina in 2024, said it is “not looking for perpetual exemptions to the final assembly rule, but rather to ensure that the implementation of this change does not undermine the investments we are making.”

The Japanese government said Treasury should use flexible interpretation of “final assembly” and “North America” to “ensure that EVs produced by allies such as Japan are accorded treatment no less favorable” than North American countries.

The new law imposes rising sourcing requirements on battery minerals and components and bars content from “foreign entities of concern.” (FEOCs) It also requires the rising use of minerals from countries where the United States has a free trade agreement.

The United Auto Workers union opposes efforts to soften North American production requirements, while the U.S. Steelworkers union said Treasury should ensure FEOCs include entities engaging “in economic practices that violate workers’ rights or that aim to achieve global dominance in a particular technology or material through illegal trade practices or currency manipulation.”

Toyota Motor Corp said Treasury “should deem that the critical mineral supply chains within Japan qualify” for the tax credit.

Tesla Inc said it “is imperative that clarifying guidance from Treasury acknowledges the important role U.S. allies will play in easing the transition to a robust domestic EV supply chain.”

Norway asked Treasury to let batteries made with its minerals qualify even though it does not have a U.S. free trade agreement.

Chrysler parent Stellantis said vehicle safety technologies should not be counted toward price caps to qualify for tax credits. “Consumers should not have to choose between fuel efficiency and safety,” the company said.

(Reporting by David Shepardson in Washington; Editing by Matthew Lewis)