Still-strong U.S. jobs report may show weakening in some of the details 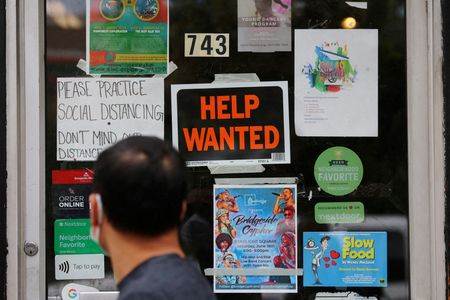 Yet under the hood may lie evidence of the “softening” Federal Reserve officials say will be needed to slow inflation from its current torrid pace.

For only the seventh time in the 30 months since the initial coronavirus lockdowns in March and April of 2020, the number of people considered unemployed increased, rising by 306,000 over September to just over 6 million.

That is a low number for the United States, and equates to a 3.7% unemployment rate that many economist would say is close to or maybe even below sustainable full employment.

But the number of unemployed has now risen in two of the last three months, and the increase in October was particularly notable.

In any given month millions of people change their labor force status, flowing from joblessness to employed, and vice versa, and joining or leaving the labor force by starting or stopping a job search, or leaving or accepting a job.

Those labor force flows are significant in their own right.

If unemployment rises, for example, because more people start looking for work, that can be a healthy sign – particularly in this environment where there are near-record numbers of job openings.

That’s not what happened in October.

The number of actual job losers jumped nearly 300,000 last month, to more than 1.6 million, a level above the 1.5 million monthly average over the last year.

At the same time, the number of unemployed people who found a job fell to about 300,000 below its yearly average.

By contrast both the number of unemployed people who effectively left the labor force by stopping a job search, or joined it by starting one, were both right at their yearly average in October.

The net change, in other words, was driven this time by job loss and a shortfall in job finding.

On average over the past year the number of unemployed has fallen by about 117,000 per month.

If that starts to trend the other way, it could both convince Fed officials that their restrictive monetary policy was starting to have an impact, while also intensifying debate over whether they have pushed too hard.