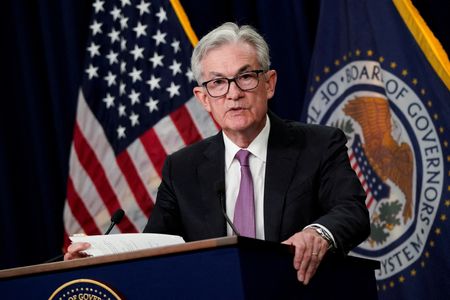 (Reuters) – Some hints that U.S. price pressures are beginning to ease even as overall inflation remains high could encourage Federal Reserve policymakers to opt for smaller interest rate increases after they deliver a fourth straight supersized hike next week.

While the Commerce Department reported on Friday that underlying inflation pressures remained stubbornly high last month, the Labor Department’s Employment Cost Index showed a considerable slowdown in private-sector wage growth in the third quarter – it rose 1.2% compared to 1.6% in the second quarter – suggesting the likelihood of a scenario of ever-rising wages pushing prices higher may be receding.

Fed policymakers are keenly attentive to the ECI as one of the better measures of labor market slack and a predictor of core inflation.

“Although another 75bp (basis point) rate hike lies in store next week, we suspect that slowdown (in wage growth) will help convince the Fed to slow the pace of tightening in December,” said Andrew Hunter, senior U.S. economist at Capital Economics.

With the U.S. central bank almost certain to lift its benchmark overnight interest rate by 75 basis points to the 3.75%-4.00% range at its Nov. 1-2 policy meeting, investors are now focused on what’s coming in December and early 2023.

Projections released last month showed policymakers’ median forecast for the federal funds rate by the end of 2023 at 4.6%. Fed officials have said they expect to hit that level by early next year and several then want to pause, arguing that the economy will need time to absorb the fastest pace of tightening in 40 years and that an easing in inflation is likely to lag the rate hikes.

Several policymakers in the last month have also appeared to be leaning toward a smaller rate hike at the Dec. 13-14 meeting.

Futures contracts tied to the Fed’s benchmark overnight interest rate were little changed after the release of Friday’s data, still pricing in a half-percentage-point hike next month and another 50 basis points over the first two meetings of next year.

Whether the Fed will be able to stick to its preferred path of a pause around 4.6% remains to be seen.

The PCE price index, which is the Fed’s preferred measure as it tracks progress in reducing inflation to its 2% target, increased 0.3% on a month-to-month basis and 6.2% on a year-to-year basis in September, matching the advances in August.

Excluding the volatile food and energy components, the PCE price index was up 0.5% in September, matching the gain in the prior month, and 5.1% in the 12 months through September, compared to a 4.9% year-on-year rise in August.

That was enough for one analyst to argue the market is undershooting the amount of Fed tightening that remains.

“Inflation is still running way too hot, the month-on-month numbers are holding steady … the numbers also show that the Fed is going to have to continue to raise rates and tighten probably longer than the market is pricing in currently,” said Oliver Pursche, senior vice president at Wealthspire Advisors.