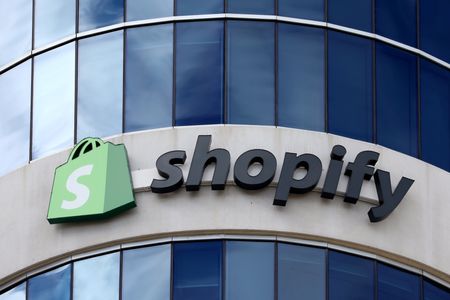 (Reuters) -Shopify Inc beat estimates for quarterly revenue on Thursday and reported a smaller-than-expected loss, powered by businesses turning to the Canadian company’s tools and payment options to scale up their online and offline presence.

The company’s U.S.-listed shares surged nearly 18% as the results allayed investor worries over a slump in demand that wiped out over three-quarters of market value this year.

Best known as a one-stop platform for online businesses, Shopify has moved to provide offline payments and other services after the pandemic-fueled surge in e-commerce ebbed.

The company has added tools for businesses to connect with their shoppers online and build on the growth of influencers on social media. The purchase of e-commerce fulfillment company Deliverr has also helped expand its services.

D.A. Davidson analyst Tom Forte said the results were “a reflection of (the company’s) ability to exploit not only the online e-commerce opportunity but also the offline retail one.”

For the holiday quarter, Shopify expects gross merchandise volume (GMV), or total sales made through the platform, to “outperform the broader U.S. retail market.”

On an adjusted basis, the company lost 2 cents per share against estimate for a 7-cent loss, according to Refinitiv IBES data.

(Reporting by Nivedita Balu in Bengaluru; Editing by Shounak Dasgupta and Shailesh Kuber)