U.S. to warn of threats to midterm elections -Politico 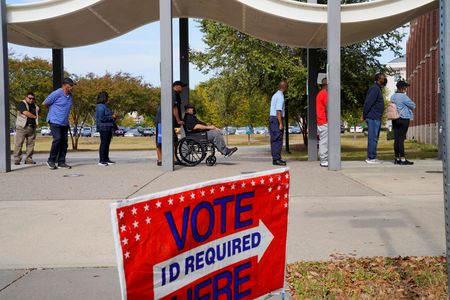 WASHINGTON (Reuters) -The federal government is set to issue a warning this week about threats to the United States’ elections operations ahead of Nov. 8 congressional elections, Politico reported on Monday.

The internal intelligence bulletin will lay out specifics on cyber threats from China and Russia, as well as potential physical threats to election officials across the country, according to the news outlet’s report, which cited two people familiar with the matter.

Republicans are aiming to win back control of the Senate and the House of Representatives from Biden’s fellow Democrats in the midterm elections.

Representatives of the Cybersecurity and Infrastructure Security Agency (CISA) referred questions to the Department of Homeland Security, which not immediately respond to a request for comment on the report.

“There is a lot of rhetoric about violence against poll workers,” said one of the U.S. officials. “So we have made it a point … to aggressively investigate all of those threats.”

Russia and Iran, accused of meddling in past U.S. elections using disinformation campaigns, are enmeshed in their own crises – the Russian invasion of Ukraine and mass protests in Iran – and have not yet been found to have targeted this election, according to the U.S. cybersecurity and law enforcement officials.

Election integrity has been a contentious issue in the United States, particularly in the aftermath of the 2020 presidential election. Republican former President Donald Trump continues to make false claims that the election was stolen from him by Democratic President Joe Biden through voting fraud.

Since 2020, there have been numerous reported incidents of poll workers being threatened, harassed or assaulted by Trump supporters, as detailed by Reuters. Opinion polls have shown that a large majority of Republican voters believe Trump won that election.