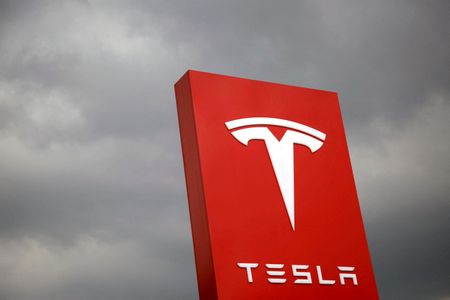 By Akash Sriram and Hyunjoo Jin

(Reuters) -Tesla Inc Chief Executive Elon Musk thinks a recession will last until the spring of 2024, he tweeted on Friday, after saying earlier this week that “a recession of sorts” in China and Europe was weighing on demand for its electric cars.

“Just guessing, but probably until spring of ’24,” Musk said on Twitter after a user asked him how long the recession would last. It was not clear if Musk was talking about a global recession or expanding on the comment on China and Europe he made on Wednesday.

Shares of Tesla Inc slid 6.6% to close at $207.28 on Thursday, a day after Musk told analysts on a conference call that the weakness in China and Europe was causing demand to be “a little harder than it otherwise would be.”

At least six brokerages lowered their price targets on the stock, with Tesla bull Wedbush Securities making the biggest cut of $60 to bring its price target to $300. Tesla’s third-quarter revenue on Wednesday missed analysts’ estimates.

While Musk told analysts that Tesla has “excellent demand” for the current quarter, the EV maker said it would miss its annual delivery target due to limited transportation capacity.

Earlier this month, Tesla said it delivered a record 343,830 EVs in the latest quarter. But not only did that miss analysts estimates of 359,162, it also fell short of Tesla’s production of 365,923, a rarity for the automaker whose deliveries have been higher or similar to production in many of recent quarters.

Musk flip-flopped on demand during a July conference call, saying at first that macroeconomic uncertainty might have some impact on demand for its electric vehicles, but when pressed for details by an analyst, he said the company did not have a demand problem but a production problem.

Musk said he had a “super bad feeling” about the economy and that Tesla needed to cut about 10% of staff, according to a June email seen by Reuters. Later, he said the reduction would apply only to salaried workers.

Tesla shares have lost more than a third of their value so far this year. They fell as much as 9% to hit a 16-month low on Thursday.

“The results will likely add to debates about demand destruction that ensued after 3Q deliveries tracked -5% below company-compiled consensus,” JP Morgan said in a report.

Tesla missed automotive gross margin expectations on Wednesday, as costs to ramp up production at its new factories in Berlin and Austin weighed.

“The bullish narrative is clearly hitting a rough patch as Tesla must now prove again to the Street that the robust growth story is running into a myriad of logistics issues as opposed to demand softening,” Wedbush analyst Daniel Ives said.