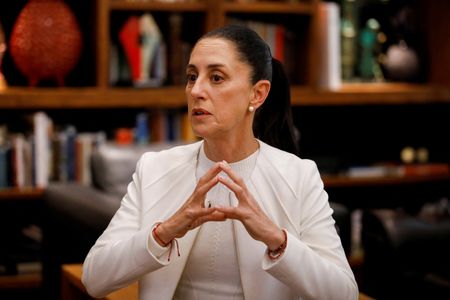 By Dave Graham and Diego Oré

MEXICO CITY (Reuters) – Mexico City Mayor Claudia Sheinbaum, a trained physicist vying to become the country’s first female president, is hoping her environmental credentials and success in curbing crime will help set her apart in the race for the top job in 2024.

Sheinbaum, a loyal ally of leftist President Andres Manuel Lopez Obrador, has held a slight lead over rivals in recent opinion polls as she gears up to compete for the presidential candidacy of the ruling National Regeneration Movement (MORENA).

A strong supporter of social welfare programs promoted by the president that have helped forge his power base and tackle inequality across the country, Sheinbaum, 60, is viewed by many inside the party as his obvious ideological successor.

“I’ve been there (with Lopez Obrador) in the good times and the bad,” she said in an interview with Reuters in the palatial city hall, pointing to a shared past with the president going back to her stint as the capital’s environment minister when he was mayor from 2000 to 2005.

“The president’s projects must be consolidated, I share the president’s vision of a Mexico with justice, and a Mexico where the welfare state must play a fundamental part in development.”

The country will elect its next president in June 2024, and Sheinbaum and other potential prospects including Foreign Minister Marcelo Ebrard have begun jostling for the MORENA candidacy, which is expected to be settled by late 2023.

Lopez Obrador, who is barred by law from standing for a second term, has dominated national politics since taking office in 2018, and MORENA remains far more popular than the main opposition parties.

Were she to succeed him, Sheinbaum, whose measured scientific reserve contrasts with Lopez Obrador’s combative approach to politics, said she was acutely aware of how symbolic the achievement would be for girls and women in Mexico and beyond.

“For me to be able to represent that, just imagine the honor and responsibility it means,” she said, hailing the example of Katya Echazarreta, who in June became the first Mexican-born woman to travel to space.

Lopez Obrador’s drive to strengthen the state oil and gas company and the national power utility – both of which depend heavily on fossil fuels – at the expense of private wind and solar power firms has caused friction with the United States and other longstanding allies.

The policy has also upset some on the Mexican left eager to see the country give priority to renewable energy sources.

Sheinbaum, who was part of an Intergovernmental Panel on Climate Change which shared the 2007 Nobel Peace Prize, has defended Lopez Obrador’s efforts to pursue energy independence, but also wants to capitalize on Mexico’s green energy reserves.

“I think it’s crucial to really take advantage of renewable energies in the country,” she said when asked how a Sheinbaum administration could differ from its predecessor, even as she stressed her support for Lopez Obrador’s vision for Mexico.

Some have also pressed for higher taxation. Asked whether she favored higher taxes, Sheinbaum declined to be drawn, saying the question would need careful analysis.

Where Mexico City has diverged is in its success in reducing gang-fuelled violence that has for years ravaged the country.

While the national murder tally barely dropped at all in 2021 from nearly 34,000 in 2018, Mexico City’s total fell by well over a third during the same period.

This year the nationwide figure has eased somewhat. In Mexico City it is on track to come down to half the 2018 total. 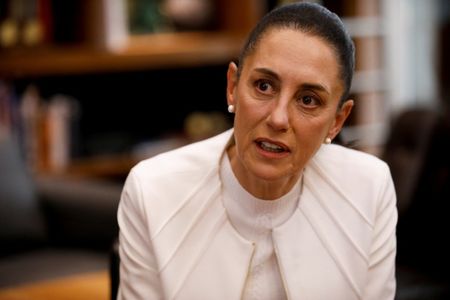