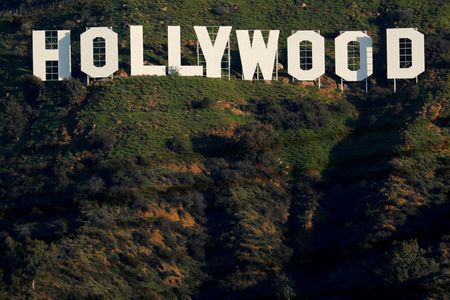 (Reuters) – The famous Hollywood sign overlooking Los Angeles is getting a facelift just ahead of its 100th anniversary, with each of the massive letters receiving a new coat of paint.

The nine-letter sign atop Mount Lee was last painted 10 years ago and needs redoing roughly every decade.

The current set of letters is actually the third sign erected atop Mount Lee over the years. The first sign, which said “Hollywoodland,” was erected in 1923, according to the Hollywood Chamber of Commerce, which helps administer the site along with the city of Los Angeles and the Hollywood Sign Trust.

“People don’t realize that, you know, when you’re standing at the sign, each letter is 45 feet high, the length of each letter. But they’re actually also about 10 to 15 feet off the ground,” said Jeff Zarrinnam, chair of the Hollywood Sign Trust. “So some of these guys are up, you know, 60, 50 to 60 feet up in the air.”

The job will use around 400 gallons (1,510 liters) of paint and special rust-prohibitive primer.