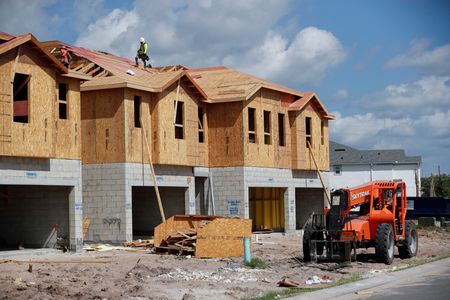 WASHINGTON (Reuters) – U.S. homebuilding unexpectedly increased in August as rising rents boosted the construction of multi-family housing to the highest level in more than 36 years, but soaring mortgage rates and high prices are undercutting the overall housing market.

The report from the Commerce Department on Tuesday showed permits for future homebuilding plunged to levels last seen during the first wave of the COVID-19 pandemic in the spring of 2020. Homebuilding is also being hobbled by persistent supply chain bottlenecks, which are raising prices for materials.

The Federal Reserve’s aggressive monetary policy tightening has significantly weakened the housing market. In contrast, other sectors of the economy, like the labor market, have shown incredible resilience despite the Fed’s attempts to cool demand.

“Since the Fed is signaling that it isn’t going to stop raising rates until it tames inflation, the housing market will continue to be weak, with the potential it experiences its own recession,” said Ryan Sweet, a senior economist at Moody’s Analytics in New York. “This isn’t entirely bad news, as the housing market was red-hot.”

Housing starts rebounded 12.2% to a seasonally adjusted annual rate of 1.575 million units last month. Data for July was revised down to a rate of 1.404 million units from the previously reported 1.446 million units. Last month’s broad rise was also due to the progress homebuilders made in reducing the construction backlog as some materials became more available.

Economists polled by Reuters had forecast starts would come in at a rate of 1.445 million units. Housing starts dipped 0.1% on a year-on-year basis in August.

Multi-family housing construction is being driven by strong demand for rental apartments, with rising borrowing costs pushing homeownership out of the reach of many Americans. A key measure of rents jumped 6.3% on a year-on-year basis in August, the most since April 1986, according to the latest consumer price data.

Single-family housing starts, which account for the biggest share of homebuilding, increased 3.4% to a rate of 935,000 units, after declining every month since March. Single-family homebuilding rose in the Midwest, the densely populated South and the West, but plunged in the Northeast.

Stocks on Wall Street were trading lower as investors anticipated another oversized interest rate hike from the Fed on Wednesday. The dollar rose against a basket of currencies. U.S. Treasury prices fell.

The U.S. central bank is expected to raise its policy rate by 75 basis points for the third time in as many policy meetings. Since March, the Fed has lifted that rate from near zero to its current range of 2.25% to 2.50%.

Mortgage rates have risen even higher. The 30-year fixed mortgage rate averaged 6.02% last week, from 5.89% in the prior week, breaking above 6% for the first time since November 2008, according to data from mortgage finance agency Freddie Mac.

Economists expect spending on homebuilding to contract further this quarter after it declined at its steepest pace in two years in the April-June quarter. Weak residential investment contributed to the second straight quarterly drop in gross domestic product during that period.

A survey on Monday showed the National Association of Home Builders/Wells Fargo Housing Market sentiment index fell for the ninth straight month in September. The survey found almost a quarter of builders reported reducing home prices and more than half were offering incentives to bolster sales, including mortgage rate buydowns and free amenities.

An outright housing market collapse is, however, unlikely because of an acute shortage of single-family homes for sale. Realtors estimate that the United States had a shortage of about 5 million homes before the COVID-19 pandemic.

Though house price inflation has started slowing, there are fewer homes being built because of financial constraints, suggesting the pace could be moderate. That could pose a conundrum for the Fed, which is seeking to bring down house prices by slowing demand for houses.

The number of houses approved for construction that are yet to be started fell 2.7% to 290,000 units. The single-family homebuilding backlog decreased 3.4% to 143,000 units, but the completions rate for this segment increased 0.4% to a rate of 1.017 million units.

The inventory of single-family housing under construction fell 0.4% to a rate of 812,000 million units. Builders are likely foregoing applying for new permits while working through their backlogs.

“These homes will have to be started, and with new demand slowing, builders can ‘catch up’ on backlogged starts,” said Isfar Munir, an economist at Citigroup in New York. “This can potentially support housing starts even if permits continue to fall, at least in the near term.” 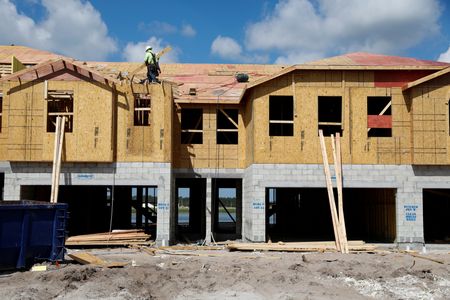 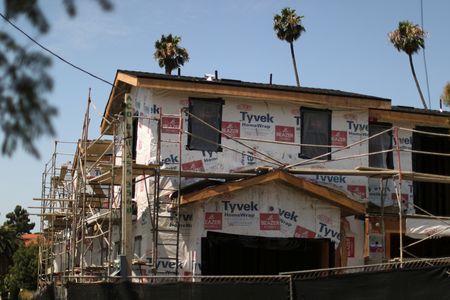 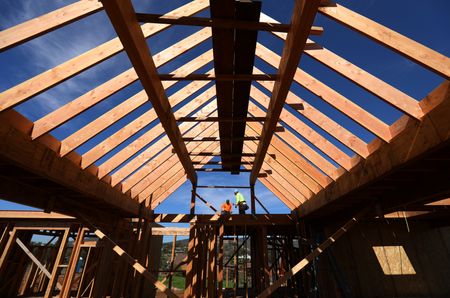