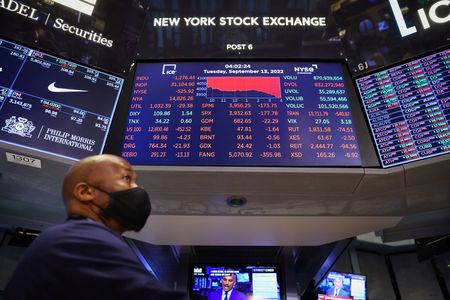 (Reuters) – Wall Street’s main indexes ended a seesaw session higher on Monday, as investors turned their attention to this week’s policy meeting at the Federal Reserve and how aggressively it will hike interest rates.

Even more so than the Ukraine war or corporate earnings, the actions of the U.S. central bank are driving market sentiment as traders try to position themselves for a rising interest rate environment.

The S&P 500 and the Nasdaq rebounded from logging their worst weekly percentage drop since June on Friday, as markets fully priced in at least a 75 basis point rise in rates at the end of Fed’s Sept. 20-21 policy meeting, with Fed funds futures showing a 15% chance of a whopping 100 bps increase.

“This is all about what’s going to happen on Wednesday, and what comes out of the Fed’s hands on Wednesday, so I think people are just going to wait and see until then,” said Josh Markman, partner at Bel Air Investment Advisors.

“We had a poor print when the CPI came in, so the Fed – who is behind the 8-ball – is now trying to get ahead of the curve and curb inflation, and that (awareness) is driving equity markets.”

Reflecting the caution for new bets ahead of the Fed meeting, just 9.58 million shares traded on U.S. exchanges on Monday, the sixth lightest day for trading volume this year.

Focus will also be on new economic projections, due to be published alongside the Fed’s policy statement at 2 p.m. ET (1800 GMT) on Wednesday.

Worries of Fed tightening have dragged the S&P 500 down 18.2% this year, with a recent dire earnings report from delivery firm FedEx Corp, an inverted U.S. Treasury yield curve and warnings from the World Bank and the IMF about an impending global economic slowdown adding to the woes.

Goldman Sachs cut its forecast for 2023 U.S. GDP late on Friday as it projects a more aggressive Fed and sees that pushing the jobless rate higher than it previously expected.

“The Fed will continue to plough along, we’ll get 75 (bps) on Wednesday, but what comes next and whether they are going to pause or not after Wednesday, that is going to be the interesting part,” said Bel Air’s Markman.

A majority of the 11 S&P 500 sectors rose. One exception was healthcare, down 0.6% as it was weighed by a fall in shares of vaccine maker Moderna Inc a day after President Joe Biden said in a CBS interview that “the pandemic is over”.

Industrial stocks rebounded 1.4% after a sharp drop on Friday, while banks gained 1.9%. Tech heavyweights Apple Inc and Tesla Inc rose 2.5% and 1.9%, respectively, to provide the biggest boost to the S&P 500 and the Nasdaq.

Take-Two Interactive Software Inc closed up 0.7%, having recovered from a slump earlier in the day caused by confirmation that a hacker had leaked the early footage of Grand Theft Auto VI, the next installment of the best-selling videogame.

Meanwhile, Knowbe4 Inc jumped 28.2% to $22.17, its highest close since May 4, after the cybersecurity firm said that Vista Equity Partners had offered to take it private for $24 per share, valuing the company at $4.22 billion.