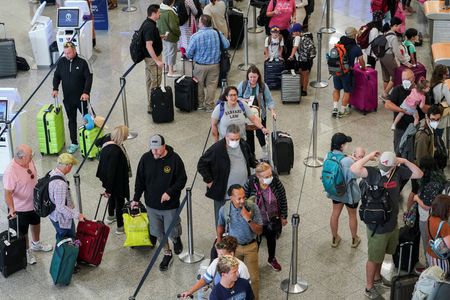 A space launch in Florida that could have impacted air travel over the weekend was scrubbed. On Monday, U.S. airlines canceled 108 flights and delayed 4,075, according to FlightAware.

Overall, U.S. summer travel did not meet early expectations as U.S. airlines trimmed summer capacity by 16% and adjusted staffing models to account for the time it takes to hire and train new employees.

On Thursday, the Transportation Department (USDOT) said the largest U.S. airlines had made “significant changes” to customer service plans with nearly all agreeing to offer passengers meals and overnight stays for delays within their control after a rough summer for travel, during which hundreds of thousands of flights were canceled or delayed.

Reuters reported that many of the changes to the customer service plans came after Secretary Pete Buttigieg told airlines Aug. 19 that he would publish a “dashboard” comparing customer protections airlines that were offering ahead of the busy U.S. Labor Day travel weekend.

Buttigieg said in the first six months, roughly 24% of U.S. airlines domestic flights were delayed and 3.2% were canceled.

Airlines argue that the commitments largely reflect what they were doing even if it was not in writing. The White House says the written commitments made the promises enforceable by the Department of Transportation.