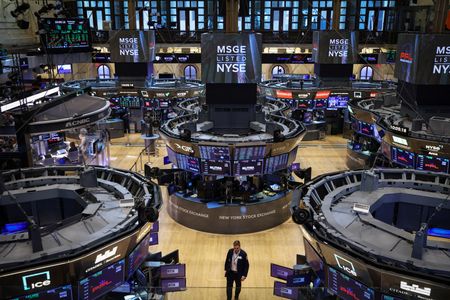 A look at the day ahead in U.S. and global markets from Mike Dolan.

Meteorological Autumn is upon us, Monday’s Labor Day holiday is in view and world markets are in a sour mood.

With the exception of Japan, short-term bond yields across the G7 continue to surge on a toxic mix of sky-high inflation, increasingly hawkish interest rate expectations and the prospect of a gradual withdrawal of central banks as bidders for bonds as they attempt to unwind their bloated balance sheets.

The sell-off in U.S. Treasuries shows no sign of abating, with markets leaning strongly to another 75 basis point rate rise from the Federal Reserve this month, despite Thursday’s surprisingly soft ADP private sector jobs report for August. Markets also now see an 80% chance of a similar hike from the European Central Bank next week too.

Two-year U.S. yields hit a fresh 15-year high of 3.52% overnight and 10-year yields above 3.2% for the first time since June – and euro zone and UK bond yields spiraled higher too. With stocks on the slide across the world again, the S&P500 futures were deep in the red ahead of Thursday’s open.

The dollar remains pumped up across the board, but Japan’s yen and Britain’s pound were in the firing line on Thursday.

With the Bank of Japan determined not to follow its G7 peers in tightening monetary policy and amid yawning bond yield gaps, the yen hit a 24-year low just under 140 per dollar – drawing warnings about excessive currency market volatility from government officials.

The pound skidded to its lowest level against the dollar since the pandemic hit – following its worst month since just after the Brexit referendum in 2016. The fear for Britain is that a winter energy price crunch is aggravating both inflation expectations and deep recession fears and the Bank of England may lag peers in tightening to plow a middle ground, even as it actively sells government bonds from its portfolio.

There was some respite on the energy front on Thursday as crude oil prices ebbed further and German power prices continued their sharp retreat from early week highs.

G7 finance ministers will discuss the U.S. proposal of a price cap on Russian oil when they meet on Friday, the White House said.

The European Commission is also looking into options to cap energy prices and cut electricity demand, as part of its upcoming proposals to tackle soaring energy costs.

Chipmakers may be in focus again after news that the U.S. government has told Nvidia to stop exporting certain chips to China.

And geopolitical tensions between the economic superpowers remained tense. The departing U.N. human rights chief has said detention of Uyghurs in Xinjiang may constitute crimes against humanity, drawing a vigorous denial from Beijing.

Key developments that should provide more direction to U.S. markets later on Thursday:

Dollar vs yen and sterling https://fingfx.thomsonreuters.com/gfx/mkt/xmvjoaorypr/Three.PNG