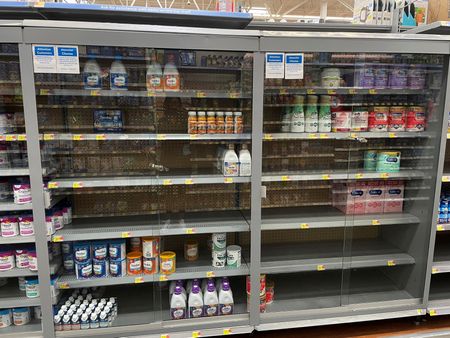 By Alexandra Alper and Mrinalika Roy

(Reuters) -The Biden administration will extend through year end waivers that make it easier for low-income families to access baby formula through a government program, the U.S. Department of Agriculture (USDA) plans to announce on Tuesday.

Earlier this year, the USDA started covering the difference in costs for states to offer a broader range of infant formula products for low-income families, after the closure of Abbott Laboratories’ Michigan plant exacerbated a national shortage of the vital product.

The plant was initially closed due to complaints of bacterial contamination.

The current waivers are set to expire on Sept. 30 and the extension will help the government avoid a steep drop in infant formula access as shortages linger in pockets across the country.

Reuters was first to report the duration of the extension but Politico reported earlier on Tuesday that an extension was likely.

Infants enrolled in the government’s WIC (women, infants and children) program consumed about 56% of all infant formula in the United States in 2018.

WIC shoppers typically can only buy formula produced by the company that has a contract with their state, territory, or tribe. Those companies provide rebates to cut the cost of formula to WIC shoppers.

Abbott Laboratories, the biggest participant in the WIC program, said on Tuesday it is extending rebates on competitive products to help low-income families through Oct. 31.

(Reporting by Mrinalika Roy in Bengaluru and Alexandra Alper in Washington, D.C.; Editing by Maju Samuel and Bill Berkrot)