Stocks rebound shows the devil in the retail: McGeever 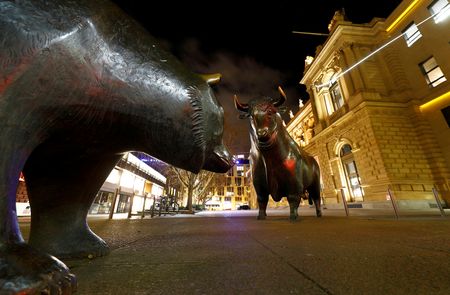 ORLANDO, Fla. (Reuters) – Retail investors are back. In fact, they never went away.

The recent rebound on Wall Street has been partly credited to strong buying by traditionally small-time ‘mom & pop’ investors.

This investor base has changed dramatically in recent years, especially since the COVID-19 pandemic. The flourishing of social media, and online trading sites and apps, has brought in a younger, more market-savvy cohort to supplement the more traditional, older investors who contribute to their retirement funds every month.

Retail investors often arrive late to an investment party and are last to leave once it has fizzled out, usually with the worst hangover. There is evidence to suggest this is what transpired earlier this year when the S&P 500 index had its worst first-half performance in more than half a century.

Only this week, retail investors were sideswiped by the dramatic swings in shares of home retailer Bed Bath & Beyond shares. The meme stock rocketed more than 130% earlier in the week, but plunged 20% on Thursday, and was down 40% in early trading on Friday.

According to Vanda Research, retail investors’ BBBY purchases and call option volumes soared to more than 70 times their all-time average, and rolling five-day net purchases soared to $188 million on Wednesday. The share collapse will sting.

But zoom out from single-name meme stocks, and the S&P 500 and Nasdaq Composite have rebounded almost 20% and 25%, respectively, from their troughs in mid-June. Vanda analysts say this has been boosted by a strong rise in retail investors’ purchases, which are now averaging $1.36 billion a day, and the rolling 21-day average is above $27 billion.

Zoom out further, and the data show that retail investors remained strong buyers throughout the January-June market slump. Yes, the 21-day rolling average got as low as $23 billion in the summer, but that was still notably above the lows from late last year of around $21 billion.

It’s worth noting, however, that any sway retail investors are having on Wall Street right now may partly be because it’s August, when liquidity is low and the big asset managers typically are on the beach.

“Equities may see more of a tug-and-pull in late August and September when most institutional investors return from their summer break,” Vanda analysts wrote on Wednesday.

KNOW WHEN TO HOLD ‘EM

The new breed of retail investor has acquired the image of a flighty, speculative day trader just looking to make a fast buck, especially in the riskier, frothier parts of financial markets such as crypto.

That is true to some extent, due to the post-pandemic liquidity splurge into financial markets that the Federal Reserve is now trying to reverse. But it may be a bit more nuanced than that.

A survey of 1,000 U.S.-based retail investors by social investment platform eToro in June – when the market was on its knees – found that 80% of them buy or sell assets on a monthly basis or less often.

At the time of the survey, some 65% of respondents had held their investments, 29% had held and bought more, and only 6% had sold.

Younger investors were less likely to hold their investments. Still, 42% of investors aged 18 to 34 did just that, while 43% held and bought more. Only 15% sold.

Those numbers tie in with Vanda’s analysis. Of course, it can be argued that retail investors are, broadly speaking, not the most sophisticated or nimble, and that they probably racked up hefty losses as the market went against them for months on end.

But had they thrown in the towel and sold, the broader market rout could have been even worse.

“The stabilization of recent weeks may have tempted some retail investors to come back in. But they never really left. They have been holding,” said Callie Cox, eToro’s U.S. investment analyst.

She reckons there is a growing argument that the bottom is in for stocks, but is cautioning retail investors not to get carried away. “We are not yet back to the highs or wild days of 2021, and we are trying to set their expectations more realistically.”

“As such, the rally is already relatively mature,” they wrote on Thursday, advising clients to stay underweight stocks.

(The opinions expressed here are those of the author, a columnist for Reuters.)