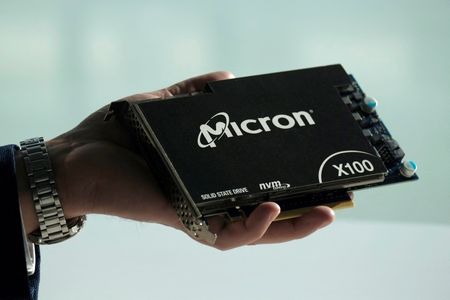 (Reuters) – Micron Technology cut its current-quarter revenue forecast on Tuesday and warned of a negative free cash flow in the coming three months as customer inventories pile up amid waning demand for chips used in PCs and smartphones.

The dismal forecast comes a day after Nvidia warned of weakness in its gaming business, accentuating fears of the first chip industry downturn since 2019.

That sent Micron’s shares and the Philadelphia SE Semiconductor index down 5.7% and 4.3%, as investors looked past U.S. President Joe Biden signing a landmark bill for $52.7 billion in subsidies for semiconductor production and research. Micron Chief Executive Sanjay Mehrotra was among the attendees at the signing.

Micron also announced a $40 billion investment in memory chip manufacturing in the United States, but said capital expenditure was expected to decrease in fiscal 2023 from 2022.

Fourth-quarter revenue is likely to come in at or below the low end of the company’s prior forecast. Its earlier range of $6.8 billion to $7.6 billion had fallen short of Wall Street targets in June.

Micron, which last reported negative free cash flow in 2020 during the early days of the pandemic, warned it could see significant sequential declines in revenue and margins in its first quarter due to a fall in shipments.

Surging prices have forced consumers to curb their spending on electronic gadgets, prompting production revaluations at companies sitting on excess inventory of chips and other components in anticipation of strong post-pandemic demand.

Shipments of PCs are expected to drop 9.5% this year, according to IT research firm Gartner. That, and cooling demand for smartphones, has drawn demand-related warnings from Micron and others including Intel, Advanced Micro Devices, Qualcomm and Nvidia Corp. Micron is seeing cloud, industrial and automotive customers also make “inventory adjustments” due to macro uncertainty, finance chief Mark Murphy said at the Keybanc Technology Leadership forum on Tuesday.

“It’s a challenging setup for this quarter.”

(Reporting by Chavi Mehta in Bengaluru; Editing by Anil D’Silva and Devika Syamnath)