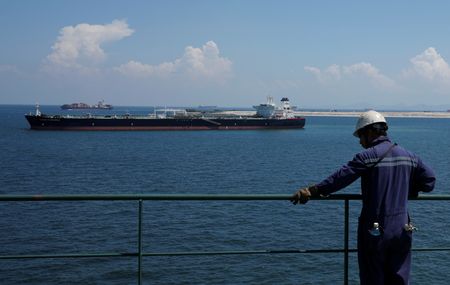 NEW YORK (Reuters) – Oil prices dropped about 4% on Monday as weak manufacturing data in several countries weighed on the demand outlook while investors braced for this week’s meeting of OPEC and its producer allies on supply.

Brent and WTI both ended July with a second straight monthly loss for the first time since 2020 as soaring inflation and higher interest rates raise fears of a recession that would erode fuel demand.

Analysts in a Reuters poll reduced their forecast for 2022 average Brent prices to $105.75, their first downward revision since April. Their estimate for WTI fell to $101.28.

However, questions about global supply loom in the oil market.

“There is still a disconnect with economic data and what we’re seeing on the supply side,” said Phil Flynn, an analyst at Price Futures group. “The oil market is still very tight, and the market is going to be on edge going into OPEC.”

The Organization of the Petroleum Exporting Countries and allies including Russia, together known as OPEC+, meet on Wednesday to decide on September output.

Two of eight OPEC+ sources in a Reuters survey said that a modest increase for September would be discussed at the Aug. 3 meeting. The rest said output is likely to be held steady.

“While President Biden’s visit to Saudi Arabia produced no immediate oil deliverables, we believe that the kingdom will reciprocate by continuing to gradually increase output,” RBC Capital analyst Helima Croft said in a note.

While OPEC+ aimed to have fully unwound its record output cuts by this month, data showed the group as of June was still almost 3 million barrels per day short of its output target as some producing countries struggle to bring wells back on line.

Also weighing on prices was a rise in Libyan oil production, which hit 1.2 million bpd, up from 800,000 bpd on July 22, after the lifting of a blockade on several oil facilities.

(Reporting by Stephanie Kelly in New York; additional reporting by Ahmad Ghaddar in London and Florence Tan in Singapore; Editing by Marguerita Choy and Matthew Lewis)