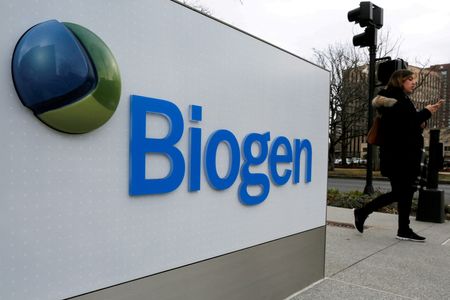 (Reuters) -Biogen Inc on Wednesday tried to assuage investor worries by laying out a plan for its Alzheimer’s disease drug being developed with Eisai Co Ltd and promising to draw lessons from the setbacks to its treatment Aduhelm.

Biogen also disclosed that it had agreed to pay $900 million to resolve a whistleblower lawsuit accusing it of paying doctors kickbacks to prescribe multiple sclerosis drugs. The case had been set to go on trial next week in Boston. It did not admit wrongdoing.

Biogen’s experimental Alzheimer’s drug, lecanemab, is crucial for the growth of the drugmaker as it faces competition for several of its blockbuster drugs, including multiple sclerosis treatment Tecfidera.

Lecanemab data is expected in the fall. Biogen and Eisai have filed for an accelerated approval and the U.S. regulator has set a January deadline.

“We’ll take learnings from Aduhelm as necessary and as where we can and we’ll resource (the launch) at each phase of its commercialization very gradually,” Chief Financial Officer Michael McDonnell said.

In June, Aduhelm became the first treatment for Alzheimer’s disease to be approved in the United States in decades, but Medicare, the government health plan for people over age 65, sharply curtailed its use on efficacy concerns.

Biogen in May had to significantly pull back the sale of Aduhelm, which generated $100,000 in the second quarter.

Since the drug’s approval, Biogen shares have been nearly halved.

On Tuesday, the shares were trading 2% lower even as the drugmaker raised its full-year profit forecast. Sales fell 18% to $397.9 million, above expectations of $367.7 million.

“We suspect investors are not likely to be satisfied by upside from such legacy products,” Piper Sandler analyst Christopher Raymond said.

Excluding items, it earned $5.25 per share, above estimates of $4.06. The profit was helped by a $500 million share repurchase program, Wedbush analyst Laura Chico said.

(Reporting by Manas Mishra in Bengaluruj; Additional reporting by Nate Raymond in Boston; Editing by Arun Koyyur and David Gregorio)