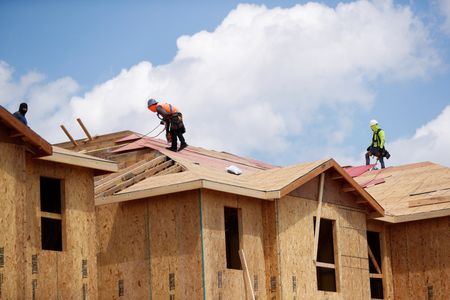 While multi-family construction gained ground as rising rents burnish the appeal of apartment projects, cushioning the overall decline, activity in the single-family segment dropped to a two-year low. Housing overall is set to have been a drag on U.S. gross domestic product in the second quarter.

Housing starts fell 2% to a seasonally adjusted annual rate of 1.559 million units last month, the lowest level since September 2021, the Commerce Department said on Tuesday. Data for May was revised higher to a rate of 1.591 million units from the previously reported 1.549 million units.

Economists polled by Reuters had forecast starts would come in at a rate of 1.580 million units. Permits for future homebuilding fell 0.6% to a rate of 1.685 million units, also the lowest since September.

Single-family housing starts, which account for the biggest share of homebuilding, tumbled 8.1% to a rate of 982,000 units in June, the first time that category has dropped below the 1 million mark in two years. Single-family homebuilding rose in the Midwest, but fell in the Northeast, South and West, where a 25.4% drop was the largest since January 2021.

Building permits for single-family homes – an indicator of future construction – declined 8% to a rate of 967,000 units, the lowest since June 2020.

“Rising rents are creating an incentive to build more rental units, even in the face of rising financing costs,” Jefferies economists Aneta Markowska and Thomas Simons said in a note. They estimate that housing overall will subtract 1.1 percentage points from gross domestic product in the second quarter after adding fractionally to total output in the first three months of the year.

Homes under construction but not completed hit a record high for a fourth straight month at a rate of 1.68 million units, reflecting the difficulty builders face in finishing projects on schedule with materials and labor in short supply.

The housing market, which is very sensitive to interest rates, has softened notably this year as the Federal Reserve lifts rates aggressively to blunt inflation that is running at its highest pace in four decades. The average contract rate on a 30-year fixed-rate mortgage climbed to nearly 6% in June, up from about 3.3% at the start of the year, which has put home purchases out of reach for a growing number of prospective buyers, particularly first-time purchasers.

While it is unclear how much higher mortgage rates will climb, it’s almost certain they will remain high for some time with the Fed set to raise interest rates again at its policy meeting next week and more hikes to come through the end of the year.

An Oxford Economics index out last week showed homes were the least affordable in the first quarter of 2022 at any time since the 2007-2009 financial crisis, and it forecast that picture would worsen through the rest of this year.

Meanwhile, a survey out on Monday showed the National Association of Home Builders/Wells Fargo Housing Market Index suffering its second-largest drop on record in July, with a gauge of prospective buyer traffic falling below the break-even level of 50 for a second straight month.