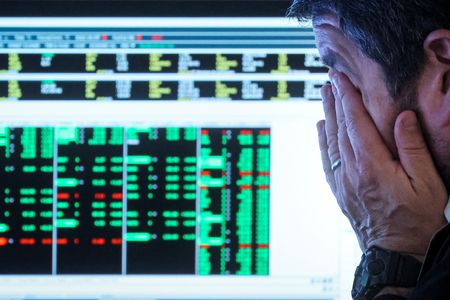 The S&P 500 index is already down about 21% this year after last week posting a 20% decline from its highs that defines a bear market. The sell-off came as the Fed deploys its biggest rate hikes in decades to fight surging inflation.

Now some banks are forecasting more tough times for markets, as worries grow that the Fed’s increasingly hawkish monetary policy will plunge the United States into an economic downturn.

Morgan Stanley strategists including Michael Wilson wrote Tuesday that an S&P 500 level of 2,900 to 3,100 – roughly 18-23% below where it stands today – would more fully reflect the typical corporate earnings contractions during recessions.

“At this point, a recession is no longer just a tail risk given the Fed’s predicament with inflation,” the Morgan Stanley analysts wrote.

Similarly, strategists at the BlackRock Investment Institute on Tuesday reiterated warnings against buying the dip in stocks, saying many are ignoring the “crushing effect” that central banks’ policy tightening is going to have on growth.

“This dynamic raises serious growth risks, and we now see the U.S. restart of economic activity stalling over the coming quarters,” wrote Jean Boivin, head of the institute, in a report on Tuesday.

While Deutsche Bank’s analysts believe a recession is more likely in 2023, “the risk of an earlier move is clearly building with declining financial conditions, and consumer and business confidence plummeting,” wrote Deutsche Bank strategist Jim Reid.

“It’s hard to see markets recovering in the second half of the year if we see firm evidence of the recession,” he said.

Societe Generale analysts said that while recession was not their base case, a “typical” recession would put the S&P 500 at 3,200 while a 1970s style stagnation with high inflation and low growth would bring stocks down to 2,525.

“Risk assets have indeed already experienced an ample correction from the peak, but we do not yet see signs of capitulation,” Alain Bokobza, head of asset allocation at Societe Generale, said in a note, recommending keeping a low risk profile allocation.

Bear markets accompanied by recession have tended to be longer and steeper, with a median decline of about 35%, data from Bespoke Investment Group showed.

On Monday, Goldman Sachs estimated a 30% chance of the U.S. economy tipping into recession over the next year, up from its previous forecast of 15%, with record-high inflation and a weak macroeconomic backdrop fueled by Russia’s invasion of Ukraine.

One silver lining for stocks may have to do with the U.S. presidential cycle, according to Bank of America technical research strategist Stephen Suttmeier.

“For those who follow the Presidential Cycle, the second half of the midterm year through the first half of Year 3 is strong,” Suttmeier said.