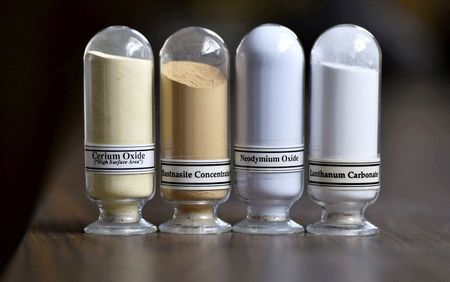 WASHINGTON (Reuters) -The United States, Canada and other countries have established a new partnership aimed at securing the supply of critical minerals, which are essential for clean energy and other technologies, as global demand for them rises, the State Department said on Tuesday.

Demand for the minerals, such as nickel, lithium and cobalt, is projected to expand significantly in the coming decades.

Massive amounts of these minerals will be needed to meet the United States’ emissions reduction goals, Jose Fernandez, under secretary for economic growth, energy and the environment at the State Department, said in a telephone interview.

“You will need six times more lithium by 2050 than you use today in order to meet the clean energy goals,” Fernandez said, speaking from Toronto. Canada “is an important supplier of critical minerals,” he added.

The minerals are key inputs in batteries, electric vehicles, wind turbines, and solar panels, and are also used in products ranging from computers to household appliances.

The Minerals Security Partnership will aim to help “catalyze investment from governments and the private sector for strategic opportunities … that adhere to the highest environmental, social, and governance standards,” the State Department said in a statement.

The U.S. government has been working with Canada to boost regional supply chains to counter China’s dominance in the sector.

Critical minerals are “a generational economic opportunity for Canada if we get it right,” Canada’s natural resources minister, Jonathan Wilkinson, said in a phone interview. He spoke from Toronto’s annual mining gathering, called the Prospectors & Developers Association of Canada conference.

Canada has large deposits of nickel and cobalt, while the United States does not, Wilkinson said.

(Reporting by Doina Chiacu in Washington and Steve Scherer in Ottawa; Editing by Lisa Shumaker and Leslie Adler)