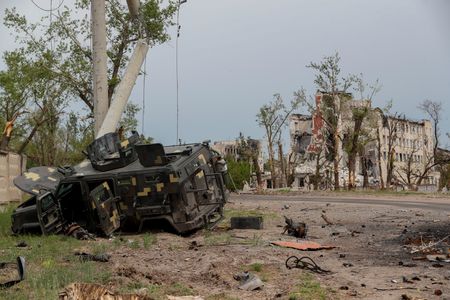 By Pavel Polityuk and Max Hunder

KYIV (Reuters) -Russian forces tightened their grip on an industrial Ukrainian city as part of their drive to control the eastern Donbas region and targeted rail links used to ferry in weapons from Kyiv’s Western allies as the war approaches its 100th day on Friday.

Russia has accused the United States of adding “fuel to the fire” after President Joe Biden announced a $700 million weapons package for Ukraine that will include advanced rocket systems with a range of up to 80 km (50 miles).

Ukraine’s President Volodymyr Zelenskiy told a forum in Slovakia on Thursday that Kyiv was grateful for the military aid it has received but added: “Weapons supplies should be stepped up … (to) ensure an inflection point in this confrontation.”

The Biden administration said Ukraine had promised it would not use the rocket systems to hit targets inside Russia. Biden hopes extending Ukraine’s artillery reach will help push Russia to negotiate an end to a war in which thousands of people have been killed, cities and towns flattened and more than six million people forced to flee the country.

“Ukraine needs weapons to liberate Ukrainian territory that Russia has temporarily occupied. We are not fighting on Russian territory, we are interested in our sovereignty and territorial integrity,” said Andriy Yermak, Zelenskiy’s chief of staff, shrugging off Moscow’s criticism of the U.S. decision.

Moscow has said it regards Ukrainian infrastructure used to bring in Western arms as a legitimate target in what it calls its “special military operation” to disarm Ukraine and rid it of ultra-nationalists the Kremlin says threaten Russian security.

“Pumping (Western) weapons into Ukraine does not change all the parameters of the special operation,” Kremlin spokesman Dmitry Peskov told reporters on a conference call.

“Its goals will be achieved, but this will bring more suffering to Ukraine,” said Peskov, responding to a question about whether U.S. plans to sell Ukraine four MQ-1C Gray Eagle drones that can be armed with Hellfire missiles for battlefield use could change the parameters of the conflict.

Zelenskiy told Luxembourg’s parliament via videolink on Thursday that Russian forces currently occupy about 20% of all Ukrainian territory and that battle frontlines now stretch more than 1,000 km (620 miles).

Russian forces, backed by heavy artillery, control most of Sievierodonetsk – now largely in ruins – after days of fierce fighting in which they have taken losses, Britain’s defence ministry said in its daily intelligence report.

“The enemy is conducting assault operations in the settlement of Sievierodonetsk,” Ukraine’s armed forces general staff said, adding that Russian forces were also attacking other parts of the east and northeast.

At least four civilians were killed and 10 wounded in the east and northeast, other officials said.

If Russia fully captures Sievierodonetsk and its smaller twin Lysychansk on the west bank of the Siverskyi Donets river, it would hold all of Luhansk, one of two provinces – with Donetsk – in the Donbas claimed by Moscow on behalf of separatists.

Capturing Luhansk would fulfil one of Russian President Vladimir Putin’s stated aims and solidify a shift in battlefield momentum after his forces were pushed back from the capital Kyiv and from northern Ukraine.

Ukraine’s General Oleksiy Gromov told a briefing that Russian forces were trying to assault the village of Berestove that lies on a main road linking Lysychansk – also under heavy Russian shelling – to the rest of the country.

Donetsk governor Pavlo Kyrylenko said Russian forces were attempting to advance south towards the key Ukraine-held cities of Kramatorsk and Sloviansk, both in Donetsk province.

The war is having a massive impact on the world economy. Russia has captured some of Ukraine’s biggest seaports and its navy controls major transport routes in the Black Sea, blocking Ukrainian shipments and deepening a global food crisis.

Russia and Ukraine together account for nearly a third of global wheat supplies, while Russia is also a key fertilizer exporter and Ukraine a major supplier of corn and sunflower oil.

In further evidence of the economic strain on Ukraine, its central bank hoisted the main interest rate to a seven-year-high of 25% from 10% on Thursday to tackle soaring inflation and shield the hryvnia currency. Bank governor Kyrylo Shevchenko also said it was time to start talks with the International Monetary Fund on a new economic support programme.

Moscow criticised as “self-destructive” a decision by the European Union this week to cut 90% of oil imports from Russia by the end of 2022, saying the move could destabilise global energy markets.

The issue will be on the agenda when Biden hosts NATO Secretary-General Jens Stoltenberg at the White House on Thursday. Stoltenberg told reporters he would soon convene a meeting in Brussels with Swedish, Finnish and Turkish officials to discuss the matter.

In a rare moment of joy for Ukraine, its soccer team advanced towards securing a place in this year’s World Cup finals with a 3-1 win over Scotland on Wednesday evening.

“Sometimes you don’t need a lot of words! Just pride … They went out, fought, persevered and won. Because they are Ukrainians!” said Zelenskiy in a message posted on the Telegram app alongside a picture of the players celebrating. 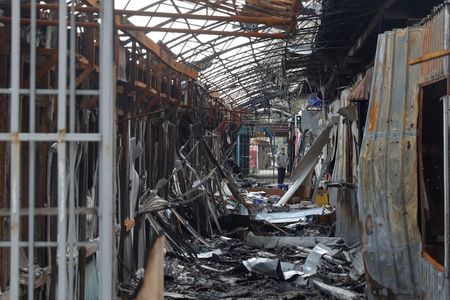 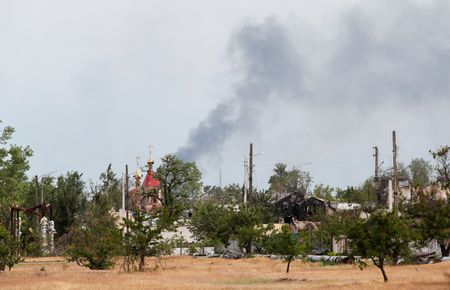 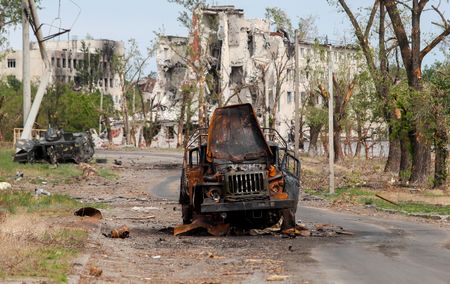