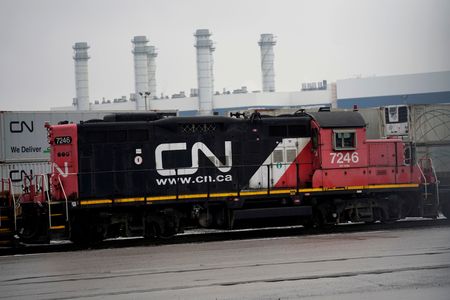 By Allison Lampert and Simon Jessop

MONTREAL/LONDON (Reuters) -Canada’s second-largest pension fund is considering withholding support from certain Canadian National Railway Co directors at an upcoming annual meeting over French-speaking representation on the company’s board, a source familiar with the matter said.

Caisse de depot et placement du Quebec is weighing the protest vote, after denouncing an earlier move in April by Canada’s biggest railroad operator that would have left its board without any local, native French-speaking directors.

Montreal-based Caisse, which is CN’s tenth biggest shareholder, declined to disclose its voting intentions ahead of the railway’s May 20 annual general meeting.

CN declined comment. The source declined to be identified as the discussions are confidential.

In late April, after concerns were raised over language, CN’s board said it would appoint a francophone and Quebec-based director “in the coming months,” to replace former provincial premier Jean Charest, who is bilingual.

Any protest vote by Caisse against certain directors, while likely symbolic, comes as investor activism over issues from climate change to social justice grows, with 2021 seen as a bumper year.

Caisse, which had C$420 billion ($322.4 billion) in assets under management at the end of 2021, is CN’s 10th largest shareholder and manages funds for the benefit of six million Quebecers. It generally avoids speaking out about a stock it holds.

But Caisse publicly waded in on the board’s composition, following Charest’s departure and the nomination of three new English-speaking directors from outside Quebec.

Caisse, which owns about 1.69% stake in CN according to Refinitiv data, called the ensuing lack of francophone representation on the board “unacceptable,” a comment echoed this week by the country’s transport minister.

Montreal-based CN counts Cascade Investment as its top shareholder. Cascade, which manages assets exclusively for the Bill & Melinda Gates Investments, was not immediately available for comment.

Proxy firm ISS recommended in a recent report that CN shareholders vote for all directors.

Other top 10 shareholders according to Refinitiv data, including Quebec-based Jarislowsky Fraser, and Vanguard Group declined comment.

While language has not galvanized investors like climate, it remains a sensitive issue in mostly French-speaking Quebec, the country’s second-most-populous province, where unhappiness over the dominance of English helped the rise of the separatist Parti Quebecois (PQ) in the 1970s.

Last year, the chief executive of Montreal-based Air Canada apologized and pledged to learn French after he said he did not need to speak the language despite spending years in the province.

Hannah Shoesmith, corporate governance specialist for EOS at Federated Hermes, said language barriers have previously been cited by boards in Korea as reasons to avoid appointing directors, although she declined to name the companies as the talks had been private.