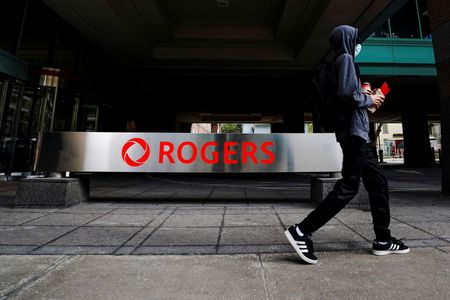 TORONTO (Reuters) -Canada’s competition bureau said on Friday that its decision to start litigation to block a C$20 billion ($15.5 billion) bid by Rogers Communications for Shaw Communications does not mean a settlement cannot be reached.

The Canadian antitrust agency this week rejected the proposed deal, saying it would undermine competition in a country that has some of the world’s steepest wireless rates.

A Competition Bureau spokesperson said in a statement sent to Reuters on Friday that proposed divestitures “will not eliminate the substantial lessening of competition and any remedy proposal would be assessed individually”.

But it also left the door open to a settlement.

“The commencement of litigation does not prevent the parties and the Bureau from reaching an agreement to remedy the competition concerns at any time,” it added.

Shares in Shaw extended gains after the Reuters report and were up as much as 2.8% to a high of C$34.74 for the day, although they are trading 14.2% below Rogers’ offer price of C$40.50, reflecting the uncertainty over the deal.

Meanwhile, shares in Rogers fell 1%, underperforming the benchmark Canada share index, which was up 2%.

Some lawyers and analysts say the deal could find support from the bureau if Rogers and Shaw propose additional remedies.

Antitrust lawyers expect Rogers and Shaw to bring in buyers with a proven record in running the business, and propose a sale of some stores or spectrum to overcome the bureau’s concerns.

A spokesperson for Rogers told Reuters on Monday that it will continue to engage with regulators to reach a resolution.

Rogers and Shaw have 45 days to respond to the bureau’s concerns, which includes proposing a new buyer for Freedom Mobile. Reuters reported this week that Montreal-based Quebecor is seen as a credible buyer.

Quebecor said on Thursday that the proposed deal between Rogers and Shaw allowed it to look “with increasing favour” on the expansion of its wireless business, given it will have the alternative of buying Shaw’s wireless assets.